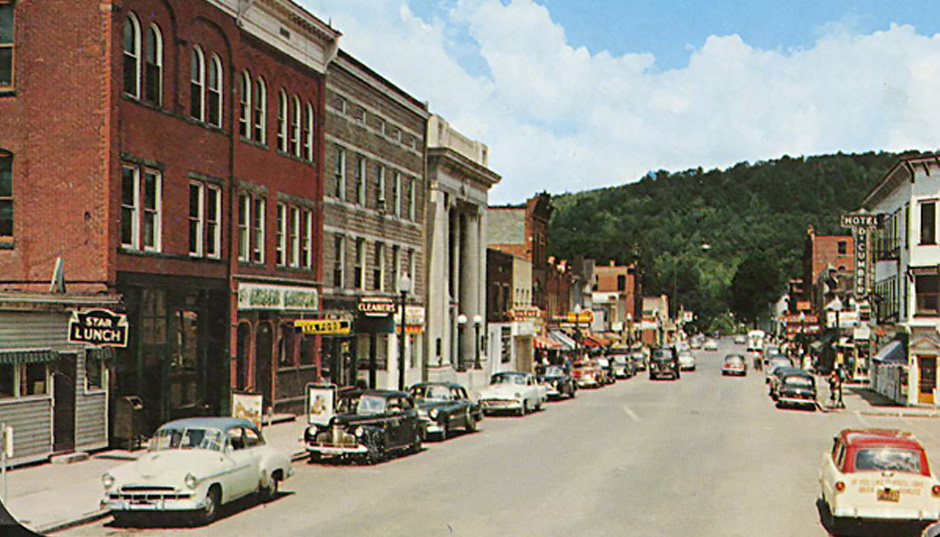 Sidney on the Susquehanna: 200 Years of History

More than 200 years ago, Sidney was an ideal dwelling place for local Indian families who enjoyed the area’s proximity to the Susquehanna River and the rolling hills surrounding it. The Town of Sidney has well over 5,000 people now who enjoy the same Sidney on the Susquehanna that drew its first inhabitants.

The area that includes the Town of Sidney was appealing to early residents for its location near the confluence of the Unadilla and Susquehanna rivers, providing handy transportation venues and a food source. A few Indian families were living along the river in the Town of Sidney before the Revolutionary War.

In 1770, Rev. William Johnston explored the Susquehanna River valley with an Indian guide, traveling from Otsego Lake to what is now Onaquaga in a canoe. In his journal, he described the valley as a beautiful country, with fertile soil and well-timbered, and he and his guide eventually landed at the place known as Brant’s Hill near the wide flat lands of Sidney Plains. This was near the site of an old Indian fort and the eventual location of the Village of Sidney. Rev. Johnston went back to his home in Schenectady and purchased that area in 1771 from Goldsboro Banyar of Albany who had been granted the land from the King of England.

In May 1772, Rev. Johnston and his son arrived at Sidney Plains on foot, driving a cow, and cleared the land and built a house for the future arrival of his family. His family joined him the following year, and for many years the area was called the Johnston settlement. Soon after, four more families came and settled in the vicinity.

Things because unsettled for the families in the Sidney Plains in 1777 when a group of 80 Iroquois warriors led by Chief Joseph Brant confronted the five families and told them to leave if they were not loyal to the King. The Johnston and Sliter families left for Cherry Valley where they stayed until November 1778. They were there for the Cherry Valley Massacre and fled the fort to the Mohawk Valley, staying there until the end of the war – nothing is known about the families who stayed in Sidney Plains. In May 1784, the Johnston family returned to their burned and pillaged farm. They built another log dwelling there and eventually built a frame house on the same spot, establishing their homestead.

The Town of Sidney was not officially formed until 1801 when it split from the Town of Franklin. On April 7 of that year, the town was named Sidney in honor of British naval officer Sir Sidney Smith who was a hero in the American and French revolutionary wars but who never actually visited Sidney.

Like most small communities in upstate New York, Sidney’s growth was first based on farming, timber and potash harvesting, and farming-related industries. Improvements in transportation included the Susquehanna Turnpike, which connected Catskill to nearby Wattles Ferry (Unadilla) and stimulated development in Sidney. Later on in the 19th Century, the Albany and Susquehanna Railroad and the Ontario and Western Railroad brought commerce to the town and village. Improved transportation brought steady growth to the Town of Sidney.

As the turn of the 20th Century neared, Sidney had a brief surge of business, which almost doubled its population from 1880 (2,461) to 1920 (4.133). During that time, many industries, such as a French cheese factory, silk mill, cigar factory, carriage works, glass works and a Hatfield car manufacturing plant were operating, making use of improved transportation to get products to market. However, a series of fires and strikes caused those companies to close.

The next spurt of growth came with the beginning of a Swiss company, Scintilla Magneto, who bought the Hatfield building to produce magnetos, used in aircraft engines. Bendix Aviation Corporation purchased Scintilla in 1929. By World War II, the company employed 8,600 people and had a world-class reputation for the manufacture of airplane parts. By 1960, the Town of Sidney’s population had surged to 7,110. The company became Amphenol Aerospace Corporation by 2003 and is the largest employer in Delaware County.

In 1946, property at the corner of Union and Division Streets was purchased from the Magneto Division of the Bendix Corporation by the Keith Clark Company, which left New York City that year for its new home in Sidney. By 1970, the Company expanded to larger piece of property by the Sidney airport. Today, it is the largest supplier of planning products in North America, producing and shipping millions of items each week during its peak selling season from October to January.

These two firms, along with Unadilla Laminated Materials and the Sidney Federal Credit Union, became major employers in Sidney. By 1963, Unadilla Laminated Materials, a silo construction company based in nearby Unadilla, had picked up steam and expanded its laminated products division into a new facility in Sidney where production continues today. In 1949, the Sidney Federal Credit Union was started to serve the banking needs of the Bendix employees and now includes nine branch locations as well as its main Sidney headquarters.

The East Sidney Dam, located in the northeast part of the Town, was completed in 1950 to control the floodwaters of Ouleout Creek. It protects communities down stream like Unadilla, Bainbridge, Conklin and Vestal from damages associated with flooding. As a local benefit, the dam forms a lake that is used for camping and recreation and run by the Town of Sidney.

The Delaware County Town of Sidney encompasses 50.7 square miles. More than 200 years from its inception, the Town includes over 5,000 residents and dozens of businesses, a critical care center, a fire district and emergency squad, a public library and an active school district.